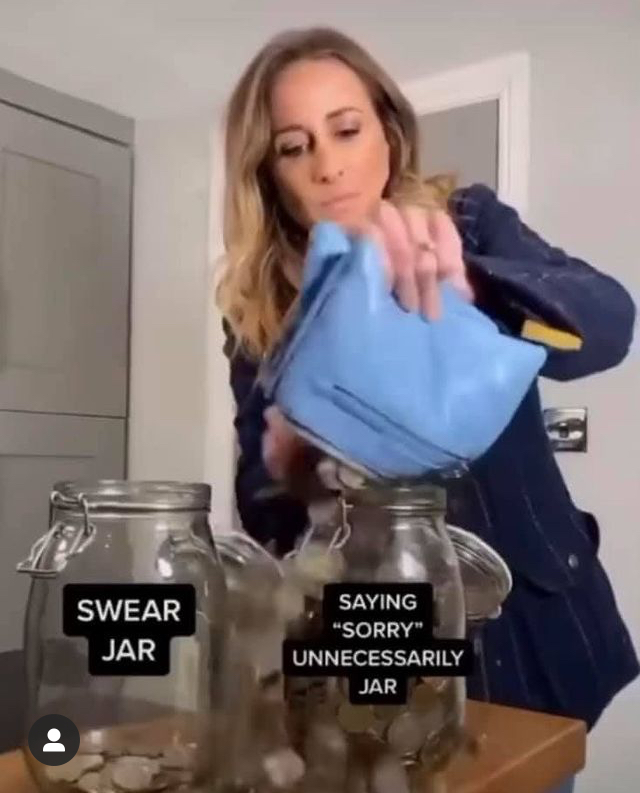 I saw a reel recently of a woman that who let herself in through the front door and there were two jars on a table waiting for her when she came home. One of them was labelled ‘Swear Jar’ and had a small number of coins in the bottom of it. The other was labelled ‘Apologising for Nothing Jar’ into which she tips the entirety of her purse and her pockets and stuffs it so full of coins and notes that the jar is overflowing.

It was surprisingly powerful as I could just picture so many women I knew giving a knowing laugh as they watched it.

There is a double bind for women in the workplace that says you can be perceived as either competent or likeable, but not both. This, I think, is one fo the reasons why we are encouraged, from an early age, to temper our presence in the way we speak and by how we say what we say.

If you’ve heard from me before, you’ll know that I’m a huge fan of Tara Mohr and the book Playing Big. I loved it so much that I trained as a playing big facilitator. One of the things that I come back to time and time again in her book is the chapter around powerful communication. The first time I read it, it resonated with me so strongly purely because I recognised so many of the traits in myself.

After reading this chapter for the first time a few years ago, I decided to spend the day not using hedges or qualifiers (more about those later), but to speak plainly and succinctly. I decided to try it in my emails. So I took a moment after drafting each email to go through and edit it. This meant that where I’d said something like ‘I think what we should perhaps do is…’, I would change that ‘Here is what I want us to do…’. Where I said, ‘I’m sure you’ve already thought of this but…’, I would simply state the change or update that I believed we should include.

I did that for a day.

By the end of the day three of my colleagues had taken me to one side to ask if I was okay because I wasn’t ‘as warm as usual’. I hadn’t made the emails rude, or unpleasant. I’d not been acerbic or unkind. I’d simply stopped apologising for what I was saying. What really fascinated me was that two of the people who took me aside were women both of whom were self described feminists and huge advocates for women’s empowerment and enabling women to speak with confidence. I thought it was fascinating that they both took me up on no longer apologising for what I was saying.

So, I wanted to explore some of these speech ’crutches’ that we use with you so that you can get the heads up on how some of the way you communicate may be letting you down, and how to spot where and when that might be happening.

Communicating powerfully is important because it will help you get your message across. It will help you speak in a way that makes you stand out, makes you be noticed, makes you be heard. Sometimes that double bind I mentioned earlier means that we are more worried about using our speech in a way that makes us feel like we are being nice and friendly and supportive and approachable, and sometimes when you’ve got a difficult message to put across, or you want to make a strong point, hedging the way you speak can diminish the power of that statement.

In Tara’s book she splits these undermining speech habits into four clear areas. I’m going to highlight them here so that you can begin to spot where you might be using them yourself.

Hedges are words like ‘just’ or ‘actually’, ‘kind of’, and ‘almost’. These are words we use to soften our speech. For example ‘I kind of think we should just…’ rather than ‘we should…’. We think softening our statements makes them ‘kinder’, but actually research show that these ‘caveats’ are associated with low-status, low-power people. By using these, you’re encouraging the perception that you are in this category. This also applies to the word ‘just’ – ‘can I just…’, ‘I’m just writing to….’, ‘I just want to say…”. just say it – without the ‘just’!

TRY IT: Draft your email and go back through removing all of the hedges before you press send.

Do you ever catch yourself saying ‘sorry, but…’ or ‘a little bit’, some how apologising for what you’re going to say? For example ‘I’d just like to tell you a little bit about my work…’. It lends a sense of not wanting to take up people’s time talking about something that matters. Save apologies for when there is a genuine need to say sorry; making your voice heard is not one of those times.

TRY IT: Something I’ve found useful recently is instead of saying ‘sorry for the delay’ when I don’t respond to emails immediately, I use the phrase ‘thank you for your patience’.

I am often guilty of this one in particular as it feels like other people might perceive my as rude on ungracious if I don’t use them. A huge example for me is ‘I’m sure you’ve already thought of this…’. Other examples are ‘I could be wrong but…’ or ‘Does that make sense?’.

I worked with a woman who was an absolute powerhouse. She was, honestly, mildly terrifying, but she got her job done and she did it well. She was a senior manager in a high pressured environment, and she definitely had impact; she had clout. However, what I found so bizarre about her was quite often she would say, ‘does that make sense?’. And for a while. I thought, (well, my inner critic was having the thought) that she thought I was not very smart, and so she was just checking that I understood what she said. That was fine when I was at the beginning of the job because I appreciated that it gave me an opener to say ‘no it doesn’t’, or, ‘I’m not sure what you meant by this’, but actually the longer I worked with her, the more I noticed that it might have been more about her.

When you add ‘does that make sense?’ at the end of your sentence, or ‘does that work for you?’, or ‘do you understand what I’m saying?’ what you’re actually doing is undermining what you’ve just said, because what you’re implying indirectly is that you haven’t articulated yourself clearly, or that what you have said has no meaning or a lack of impact. So, check in with yourself when you end your meeting contributions, or your discussions with colleagues with ‘does that make sense?’.

TRY IT: Instead of asking if you made sense, try turning it around to them ‘Does anyone have any questions?’

These are ways of speaking that change the structure of a sentence or paragraph. For example, ‘uptalk’ – that way of speaking where your tone goes up (or singsongy) at the end of a sentence. My Mum would have said that this is a habit that a younger generation have! The impact of this is that it turns your statement into a question, therefore making you sound unsure about what you are saying.

Using actual questions instead of statements is another example of an undermining structure, for example ‘How about we try doing it this way?’ rather than ‘I believe we should do it this way’ By phrasing it as a question you risk coming across as not having a clear point of view or opinion. Be careful about using questions where you are really trying to make a statement.

Also be careful about rushing in your speech. Sometimes we work so hard to get the airtime, that when it is finally ours we garble through what we want to say. Don’t be afraid of using pauses. You can use them to gather your breath, meaning that you can continue to speak clearly and with strength and volume, and they actually build an air of confidence into what you’re saying.

TRY IT: Try pausing for a little longer than feels normal when you are speaking. Notice what it does for your speech and the way it feels.

Why don’t you set yourself a deadline to pick one of those undermining speech habits and see if you can experiment with altering it. An easy way to start is with emails as they give you time to pause, go back, edit, think about what you want to say and say it.

Don’t use the qualifiers, don’t use the hedges. Put your message across with power, more succinctly, and clearer. You’ll be making your point with more gravitas and impact. It doesn’t mean that you’re not a nice person, it doesn’t mean you’re not friendly or approachable, and in fact, in this current environment where we are all competing to be busy, people may appreciate the direct approach that gets straight to the point.

What you have to say is important. Your contribution is valuable. You wouldn’t be where you are and doing what you’re doing if you weren’t able, capable and competent.  Don’t let your communications let you down. Be confident about what you’re saying; make sure that your voice is heard and that you’re communicating with power.

Let me know how you get on, I’d love to hear from you about the differences you found in communicating with power.